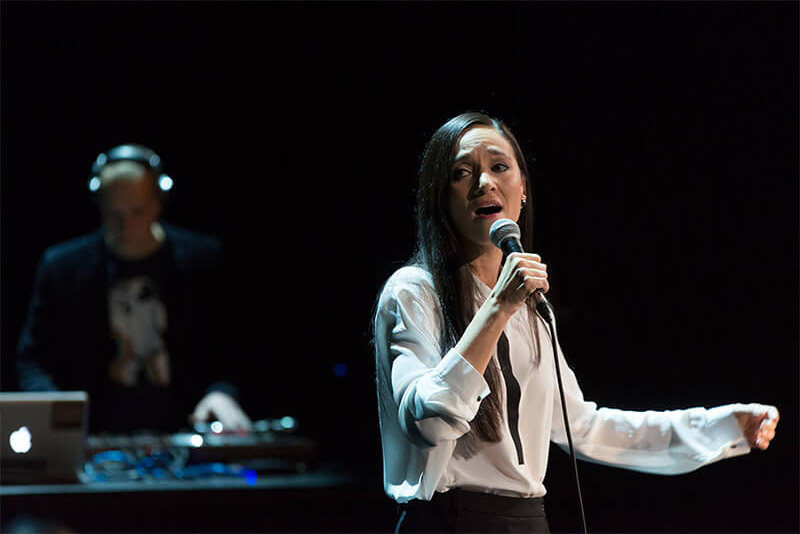 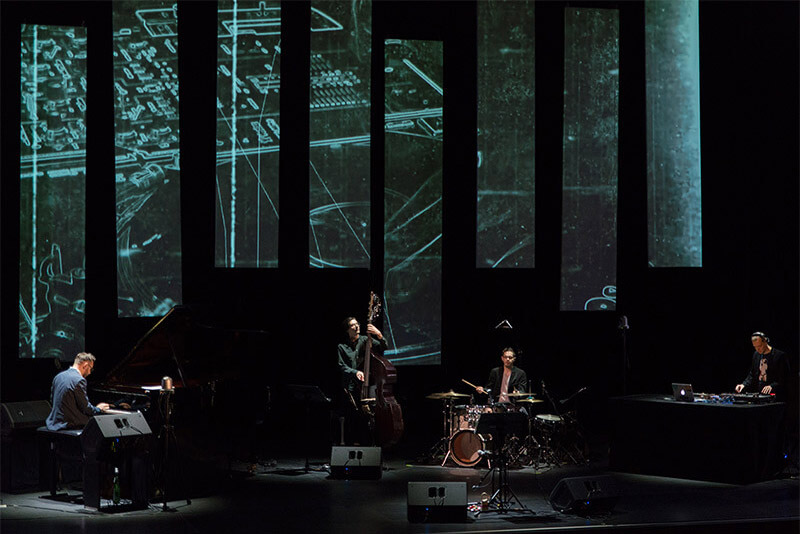 Peter Evans is a trumpet player and composer based in New York City since 2003.   Evans is part of a broad, hybridized scene of musical experimentation and his work cuts across a wide range of modern musical practices and traditions.  Peter is committed to the simultaneously self-determining and collaborative nature of musical improvisation as a compositional tool, and works with an ever-expanding group of musicians and composers in the creation of new music.

His primary groups as a leader are the Peter Evans Ensemble (with Mazz Swift, Ron Stabinsky and Levy Lorenzo) and Being & Becoming (with Joel Ross, Nick Jozwiak and Savannah Harris).  Evans has been exploring solo trumpet music since 2002 and is widely recognized as a leading voice in the field, having released 6 albums of solo music since 2006. He is also a member of several collaborative groups; duos with Levy Lorenzo and Sam Pluta, Rocket Science and Pulverize the Sound.

As a composer, he has been commissioned by the International Contemporary Ensemble (ICE), Wet Ink, Yarn/Wire, the Donaueschingen Musiktage Festival, the Jerome Foundation’s Emerging Artist Program, and the Doris Duke Foundation. Evans has presented and/or performed his works at major festivals worldwide and tours his own groups extensively.

Peter Evans has been releasing recordings on his own label, More is More, since 2011, beginning with the highly acclaimed „Ghosts”. 2021 will bring the second recording by Being & Becoming, as well as an album of Christmas music with 3 pianos.

A strong tree has many roots. The jazz band Root 70 celebrated its 20th anniversary in 2020 and it puts  down this longevity to a whole series of facts. Trombonist Nils Wogram, saxophonist Hayden Chisholm,  bassist Matt Penman and drummer Jochen Rückert form one of the most stable formations in jazz history.

In May 2000 Root 70 gave its first concert under this name at the Moers Festival. It is unusual that four  personalities who are such strong individualists, not only on their instruments but also as musical charac ters, should nevertheless achieve a highly symbiotic band sound. These four protagonists feel connected

by a similar system of musical values and are committed to a similar basic aesthetic. So they had common  intersections; looking for them was unnecessary. But Root 70 managed to do something that few bands  have been able to do over so many years: The group has built their work using contrasting ideas – the ten sion between the musicians – from which new overlaps, breaks, changes of perspective and approaches  constantly emerge. Each of the four has found their own place in the band, a place that is flexible and ta kes personal differences into account. If things were different, the salt would be missing in the soup. You  can have differences with your fellow musicians and still make music together, because you basically un derstand your companions.

Purely musically, the band achieved a kind of sophistication. They translate their skills as musicians into  music with character, not something that is simply well played. They wanted to surprise the audience and  also themselves with ever new ideas, they didn´t just want to scratch the surface, but to go into depth.

While Cologne was initially a kind of epicenter for Root 70, there is now a great spatial distance between  the musicians. Wogram lives in Switzerland, Chisholm in Ireland, Rückert and Penman in New York. Lo gistically, this creates challenges that are not always easy to overcome, but instead of the former spontaneity of meeting, today there is an unconditional will to harmonize with each other even over long distan ces.

What brought the four musicians together in the beginning still connects them today. Root 70 is  more than a musical institution, more than a success story documented on eight albums. Root 70 is  a utopia of reconciling opposites without corrupting the individual claim of each part of the whole.

Nicknamed “the bluesman of Morocco”, Majid Bekkas is originally from Zagora, (south of Morocco), and born in Salé near Rabat in 1957,he has his roots in the  North African music and a long experience  in blues and jazz ,which makes him a unique musician who masters both traditional and modern music.

In 2001, his record« African Gnaoua Blues » became a real reference in Gnaoua music and its relationship with the blues.

In 2003, he met the well-known German pianist Joachim Kuhn and the Spanish drummer Ramon Lopez. Together, they formed a great trio, recorded 5 albums for « Act music » in Germany and performed in a lot of jazz and world music festivals for 16 years.

When 2006 has come, Majid had gone on a tour and recorded with the famous German saxophonist Klaus Doldinguer (Passeport to Morocco), Majid played also with Archie Shepp and Pharoah Sanders and many others.

His record « Makenba »in 2010 with Louis Sclavis, Minino Garay and Aly Keita was selected by « Songlines »magazine, as the best Album Gnaoua fusion.

In 2015,Majid received the price of the « Academy Charles Cros » in Marseille (France) for his album « Al qantara » .

In 2018, he also received the price « Visa for Music » in Rabat, Morocco, for his global work.

As a co-artistic director of « Jazz au Chellah » festival in Rabat since 1996, Majid had the chance to meet many European Jazz musicians and play with them. In fact, in this same festival, Majid got to know the musicians of this new project « Magic spirit quartet »

Jean-Paul Bourelly is an innovative and experimental guitarist, composer and producer who excels at blending and bending various musical styles into cohesive expression. His thick assertive guitar sound is informed by his Haitian and blues roots growing up on Chicago’s south side.

He has led over 20 recordings as a guitarist, including Truth to Power, Stone Raiders with longtime associate bassist Darryl Jones, Boom Bop featuring the late Abdourahmane Diop and soon to be released debut Citizen X w poet Sadiq Bey. His work continues to lead him in a variety of areas including reworking the harmonics of the blues and a quest to formulate work inspired by west african, blues, dream states and groovy otherness.

Bourelly appeared on the album „Amandla” by Miles Davis as well as in bands with Reunited with Elvin Jones, McCoy Tyner, and Pharaoh Sanders. He worked with rappers like D-Nice, created projects with noise guitarist Elliott Sharp, Vernon Reid, Dennis Chambers, TM Stevens, Melvin Gibbs and Cindy Blackman, and produced albums for Cassandra Wilson. His label and production studio JPGotMangos serves as a creative outlet for his most progressive projects and collaborations including his latest release Kiss the Sky and the upcoming Hips Project – Sound and Motion in the Other-Sphere.

New York based saxophonist/composer SEAMUS BLAKE is recognized as one of the finest exponents of contemporary jazz. His music is known for its sophistication, bold improvisations and “sheer swagger”.  John Scofield, who hired Seamus for his “Quiet Band,” called him “extraordinary, a total saxophonist.” Throughout his 24 year career, Seamus has garnered critical praise for his masterful playing, his fine compositional skills and for his facility as a leader.

Since moving to Paris in February 2018 Seamus has been invited to perform the music of his recent CD, „Superconductor” with a number of European Jazz Bands. Beginning with the Latvian Radio Jazz Band early in 2018, Seamus has performed with the Trondheim Big Band and The Sibis Alumni Big Band (Sibelius Institute , Helsinki),in September. He is scheduled to perform his music with The Tuesday Big Band (Amsterdam) on November 6/7, and The Subway Jazz Orchestra on November 14.

In 2017 Seamus assembled a new quartet, The French Connection. The band ( Seamus, Tony Tixier piano, Florent Nisse, bass, and Gautier Garrigue, drums) recorded their first CD in Paris in November, 2017 and have toured in France and Spain. The CD will be released on the Whirlwind label. Three promo videos will be available on Youtube in January. Seamus has a busy schedule in Europe in 2018. Check the Performance page for details.

Superconductor is Seamus’ most ambitious project to date and was released in December 2015. The talent includes Nate Smith, Matt Garrison, Scott Kinsey, a 7 piece orchestral ensemble as well as special guest appearances by John Scofield and Gonzalo Rubalcaba. The album marks the debut of Seamus on EWI (electronic wind instrument). Seamus plays on the 2015 Grammy nominated Camino by pianist Gonzalo Rubalcaba.

Seamus Blake was born December 1970 in England and raised in Vancouver, Canada. At age 21, while still a student at Boston’s prestigious Berklee College, he was asked to record with legendary drummer Victor Lewis.  After graduation, he moved to New York, where he rapidly established himself on the New York jazz scene.  In February 2002, Seamus took first place in the Thelonious Monk International Jazz Saxophone Competition in Washington D. C. As the winner, he performed with Wayne Shorter and Herbie Hancock.

As a leader/co-leader , Seamus has released 16 albums. He is featured as a sideman on over 70 CDs.

Seamus has played on six of of the Grammy nominated Mingus bands’ albums   He continues to play and record with Bill Stewart, Kevin Hays, David Kikoski and Alex Sipiagin.  Seamus is frequently featured as a guest artist. In 2010 he was guest of honor at the International Saxophone Symposium in Washington hosted by the US Navy Band.  Seamus was a member of John Scofield’s Quiet Band and toured and recorded with Dave Douglas. Some of the many other artists he has worked with include Eric Reed, Ethan Iverson, Chris Cheek, and Matt Penman.

Jure Pukl was awarded highest national award for contribution to Arts in Slovenia (Nagrada Prešernovega sklada 2015) and is one of the most prolific and creative saxophonists of the younger Slovene jazz generation. Pukl obtained university education abroad and studied classical and jazz saxophone at the University in Vienna as well as at the Haag Conservatory of Music. Pukl then won a scholarship to the Berklee College of Music, where he pursued his studies with masters such as Joe Lovano and George Garzone. He completed his masters degree in music at the Graz Academy of Music.

His music has won him many awards and in his auctorial projects, such as the Doubtless, Broken Circles, Abstract Society, MEAT or Sound Pictures, Pukl dedicates himself to modern interpretations of jazz and improvised music.

What he creates is a unique type of modern jazz, avantgarde, free jazz and impressionistic contemporary music performed with a great deal of knowledge and love, giving prominence to the interplay between band members. He published 8 Albums under his own name and received rave reviews all over the globe among others in the influential Downbeat, The New York Times, Jazzwise, Jazz Podium and All About Jazz. He is also featured on more than 50 other projects as a sideman.

“Jure put together a record that flows like the wind.” Joe Lovano